Photinia ‘Red Robin’ VS Photinia ‘Carre Rouge’: which is best 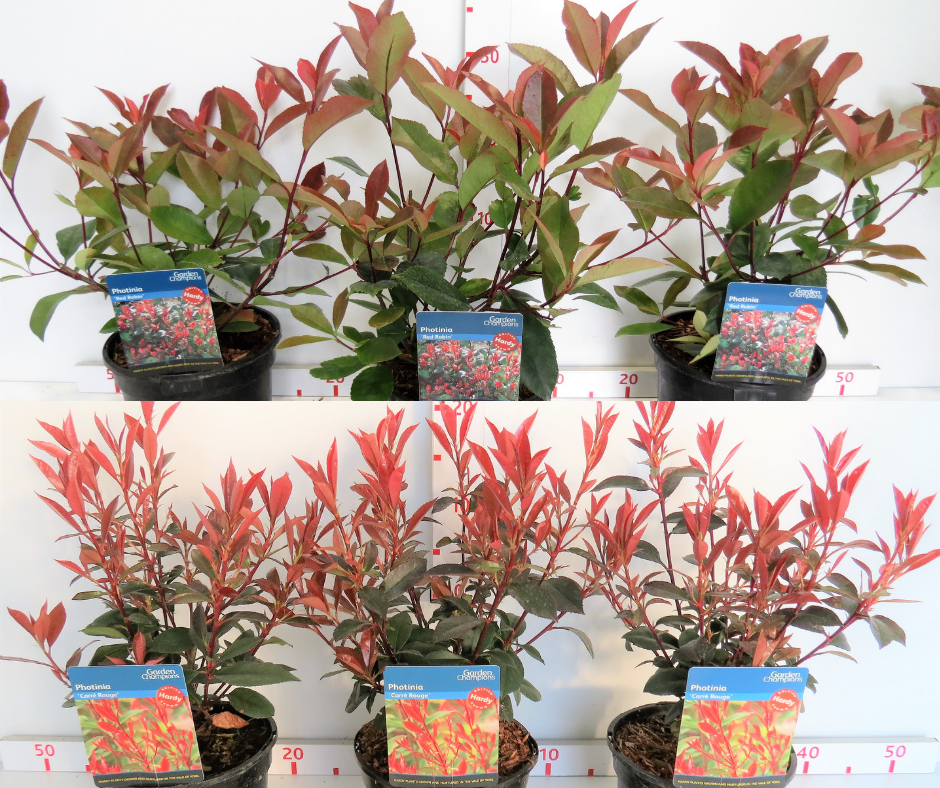 We have been producing Photinia ‘Red Robin’ on our nursery for over 25 years, however, we are always on the lookout for new and developing plant trends in our industry for our team to test new lines. Over the last couple of years, we have trialled several of the new Photinia ‘Carre Rouge’ variety and found it to be a tidier, and much more compact plant, with stronger red colouring.

So what are the highlights of both varieties, and what makes Photinia ‘Carre Rouge’ one to watch?

Photinia ‘Red Robin’ is a versatile evergreen shrub that can be used for hedging, trained against a wall and even used as a ½ std tree once trained. It is happy in most fertile soils, in either a sunny or shaded position. If you wish to encourage its strong red growth and more flowers, it will be better planted in a full sun position. White flowers appear by April and into May once the plant is better established. We have found Photinia ‘Red ‘Robin’ to become ‘leggy’ over time if it is not properly maintained, and left to run away with themselves, they can grow up to 4m tall and up to 4 m wide.

Photinia ‘Carre Rouge’ is a new compact variety that has blood red growth and smaller leaves reaching up to 2.5 m tall -nearly half the size of its mother plant Photinia ‘Red Robin’, - making it a much more appealing hedging variety, and an easily managed landscape shrub. Its red colouring is much more intense than that of ‘Red Robin’, while also being more tolerant of hard pruning and shaping. Similar to ‘Red Robin’, it produces white flowers come April and May if sited in a sunny position.

Production Manager Designate Robert Richardson said ‘’Photinia ‘Carre Rouge’ stays red whereas Photinia ‘Red Robin’ fades to green. It is also compact where a ‘Red Robin’ tends to sprawl and become unmanageable. I believe it is a much more appropriate plant for most landscape and garden settings, and in time, I can only see its popularity increasing.’’