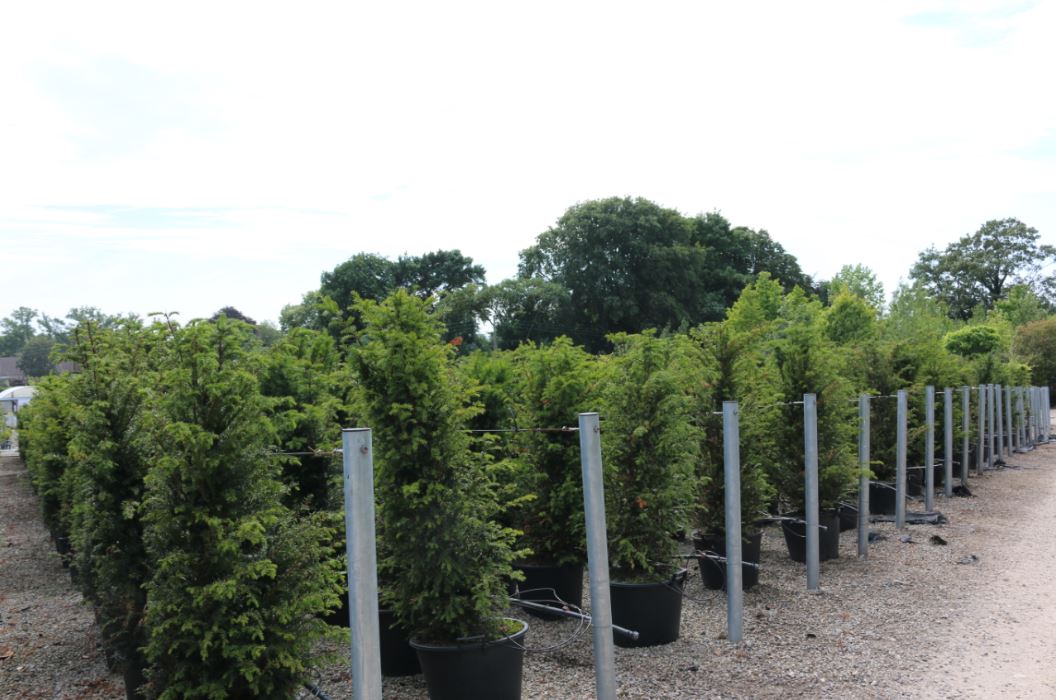 Since 1983 we’ve been supplying specimen container grown hedging plants to the World Heritage Site to replace its yew ‘bosquet’ hedges which have become overgrown causing them to lose their formal appearance.

The work is part of a massive programme of works that has been taking place at the Studley Royal water garden. Since taking over the site from North Yorkshire CC in 1983, the estate has invested millions of pounds in its work to safeguard this unique garden which was designated a World Heritage Site in 1987.

A bosquet is a group or plantation of trees and shrubs, often planted in straight lines or geometric shapes; they can be but not always are surrounded by formal hedges (green walls) or paths of gravel.

Influenced by late 17th century French fashion for formality the garden makers at Studley Royal used bosquets throughout the water garden using English yew as their favoured hedging plant.
The current overgrown, and in some places dying yew ‘bosquet’ hedge which is just over 800 metres in length, will be removed from the garden in autumn/winter 2018 and replaced with specially selected 125cm specimen container plants, which will be planted in the garden in 2019.

The specimen container plants, which were planted in October 2016, are currently growing and being nurtured at our Newlands nursery, and have already started to take shape. At the end of April the plants were shaped and another trim will be undertaken later this year.

If required, stock may be transferred into air pots to stimulate root development and returned to our Thornville site.

Group director Graham Richardson from Johnsons of Whixley, said: “We’re delighted to be working again at Studley Royal & Fountains Abbey, and are excited to be helping to restore such a beautiful garden which has so much of Yorkshire’s history behind it.

“We have a long history of working closely with the National Trust and a proven track record of delivering to a precise specification that produces an effective result.

“Growing large hedges is a genuine horticultural challenge where attention to detail is critical throughout the process.”

Head of Landscape at Fountains Abbey & Studley Royal, Michael Ridsdale, said: “The yew bosquet is a key feature of the landscape here in the water garden. We’re pleased to be working with Johnsons of Whixley to grow new yew trees specifically for the project we have in mind, it means we can grow them to an appropriate size off-site before planting, which significantly reduces the impact of the work on the landscape.”