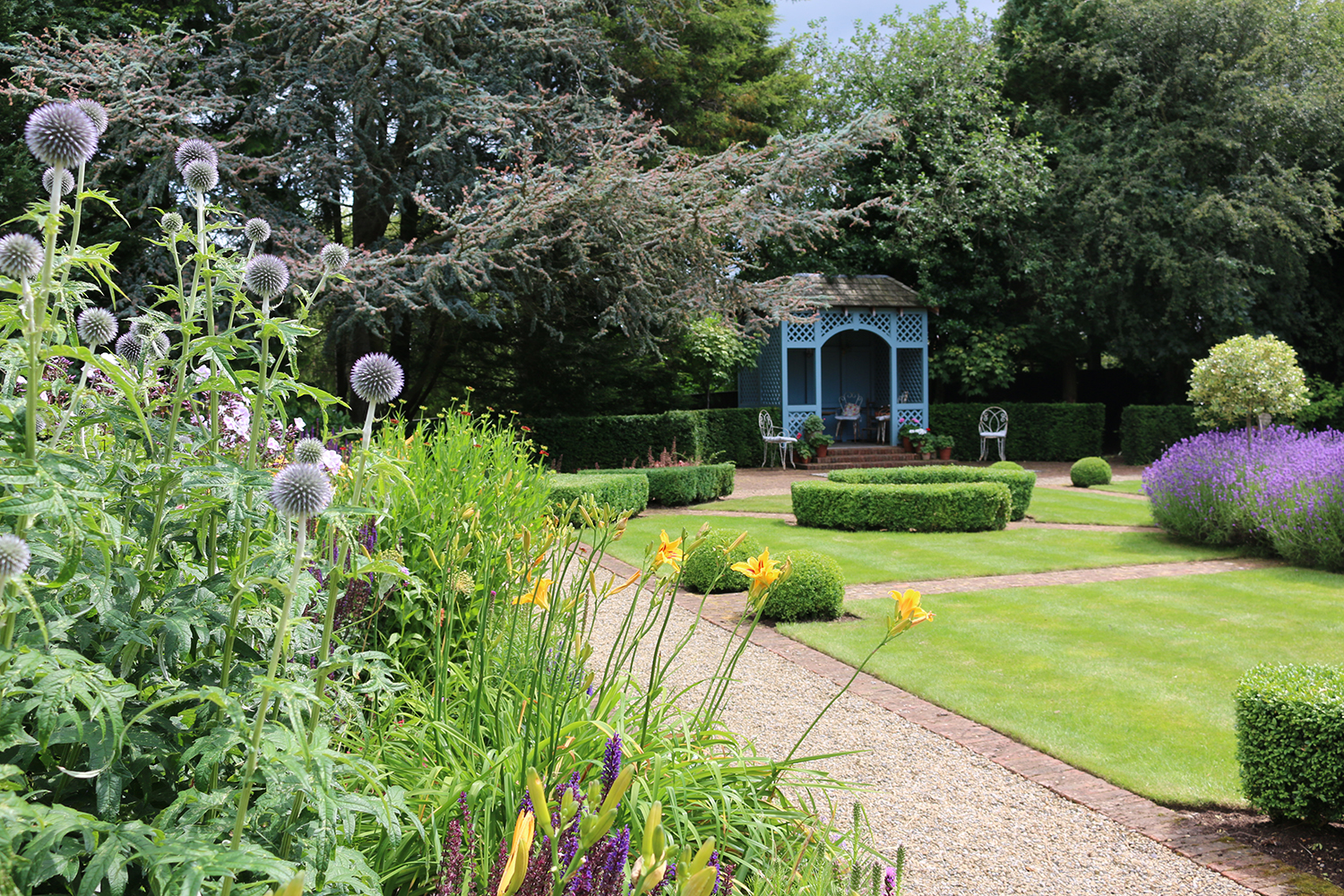 Earlier this month we joined Helen Taylor Garden Design for her annual Garden Visits Day to see recently completed gardens in the Ilkley area.  As a supplier to Helen, it was a great opportunity to see many of our plant supplies in their final destination and to see how they have been used.

The day of garden visits started in Burley in Wharfedale, with a south-facing garden remodelled to create a space focused on growing produce. The design included raised hardwood beds filled with vegetable plants, and trained fruit trees growing against a fence. The garden also featured a  Rhino greenhouse, carrots growing in bins and hostas surrounding a pond. 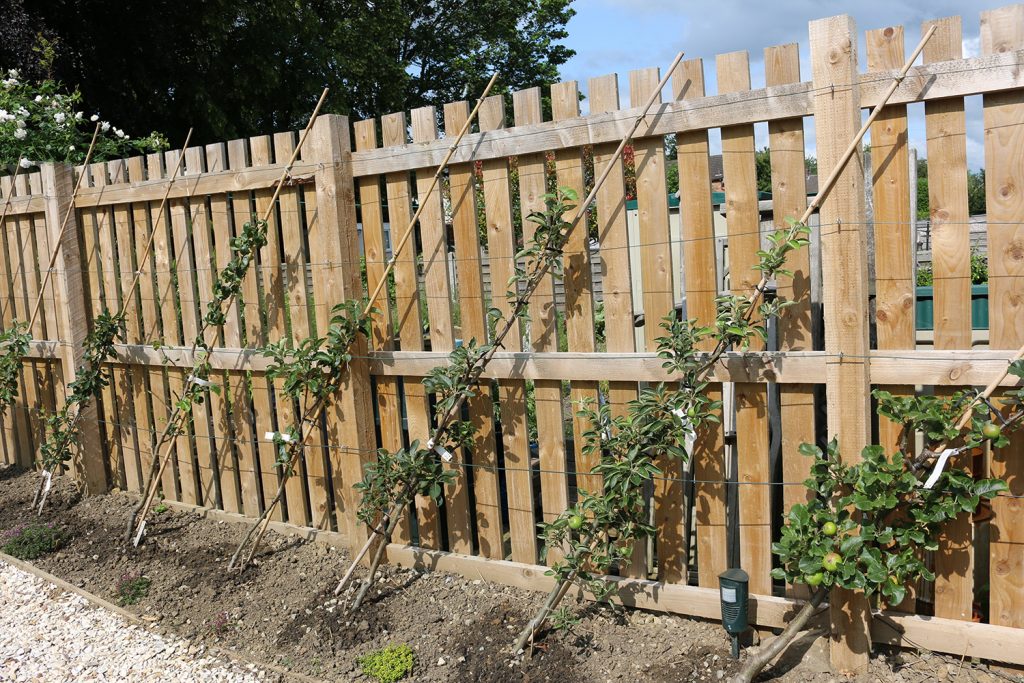 The second garden on Moor Lane had a large, front sunny bed edging the large driveway. The planting combinations by Helen Taylor Garden Design were just stunning, making use of some lovely combinations, with mass planting of Lavandula ‘Alba’ and Rosa Kent at the entrance to the drive, and the main border consisting of a soft mix of whites, purple and blue coloured perennials  including  Nepetas, Salvia Caradonna, Alliums, Agapanthus and Delphiniums, with the silvery Stachy lanata Silver Carpet as an edging punctuated by Buxus balls. It was great to see such a beautiful design incorporating so many plants from our nursery. 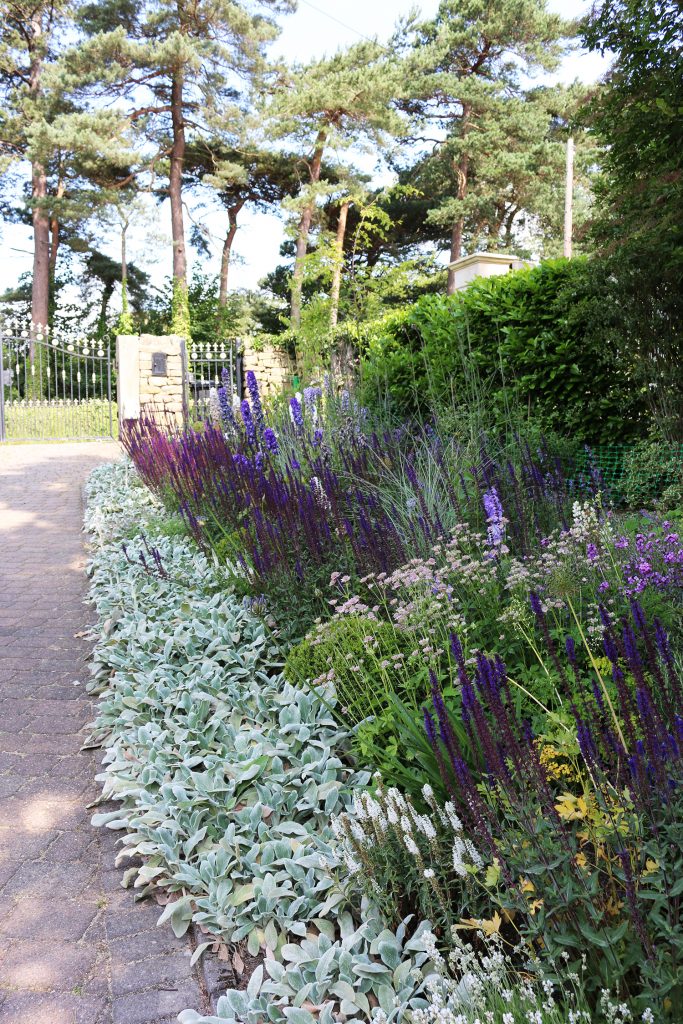 The final garden of the morning was a terraced country garden on the edge of the moor. This private space included dry stone walling and newly planted cottage style perennials, including Erigeron which softened the dry-stone walls beautifully, Knautias, Astrantias, Lavenders, Astilbes and Erysimums. 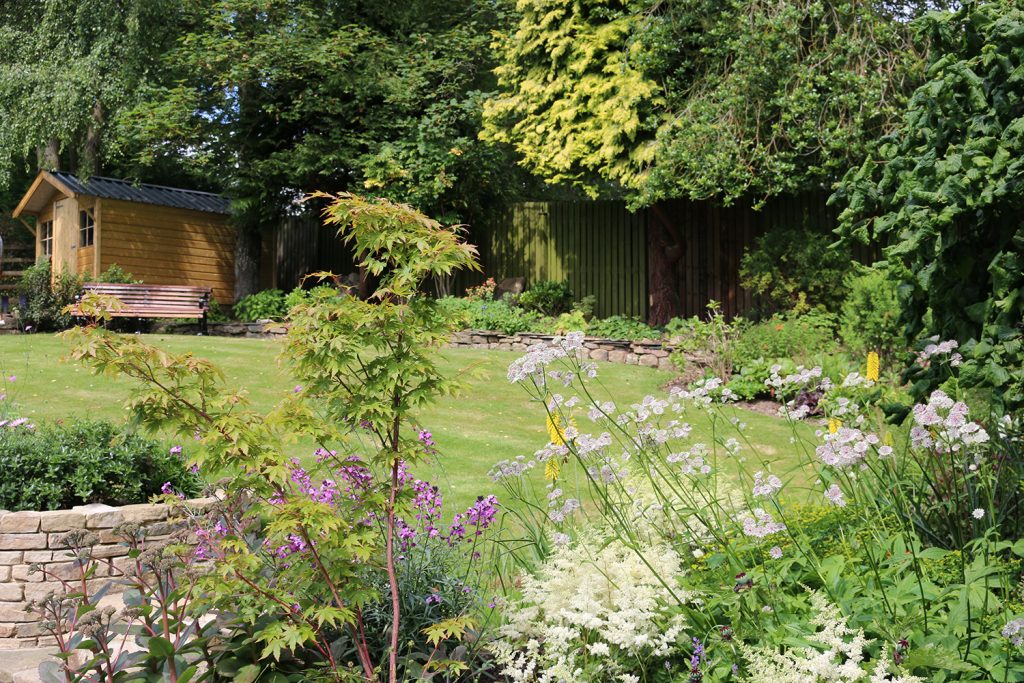 Impactful use of colour, Ilkley

As the tour progressed, we visited a small town garden Ilkley with a contemporary style in the use of materials and plants. The garden was designed to include a lower terrace with a raised lawn surrounded with a hot colour pallet of plants. It had a fantastic impact on arrival, and a wonderful combination of plants including red Achilleas, Salvia Caradonna, Miscanthus Morning Light, Heuchera, Nepeta and Alliums. 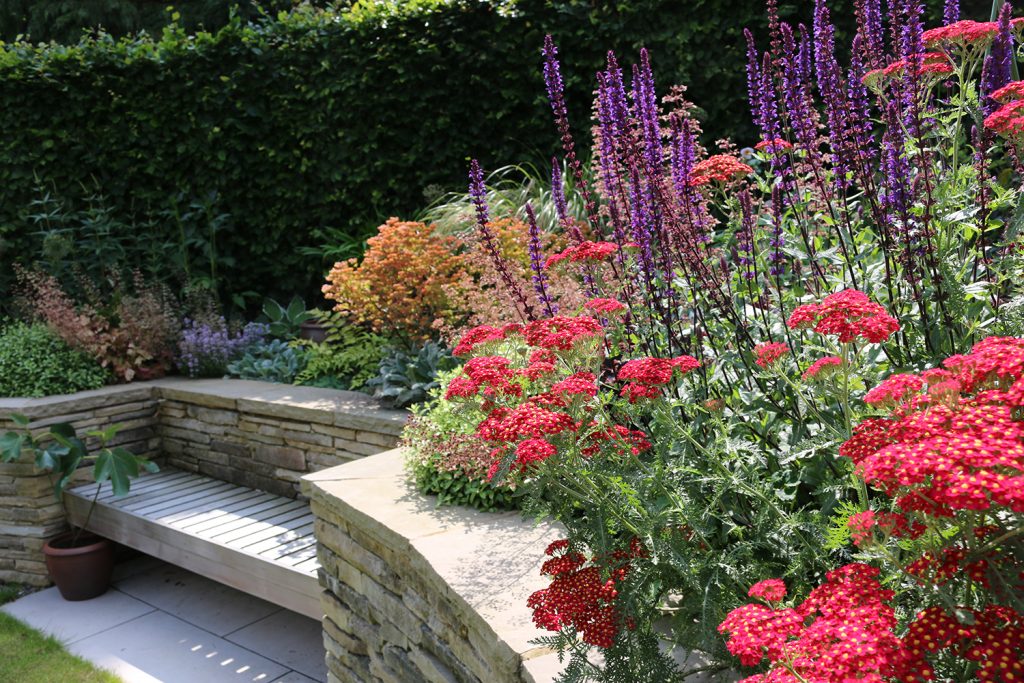 Our next visit was at the opposite end of the colour spectrum using a mix of tonal greens, whites and purples. The flagged courtyard included dry stone raised beds and grey painted trellis to complement the soft planting. The photos show the Brunnera Jack Frost and Astrantias, underplanting a purple Acer in a shaded area of the garden. 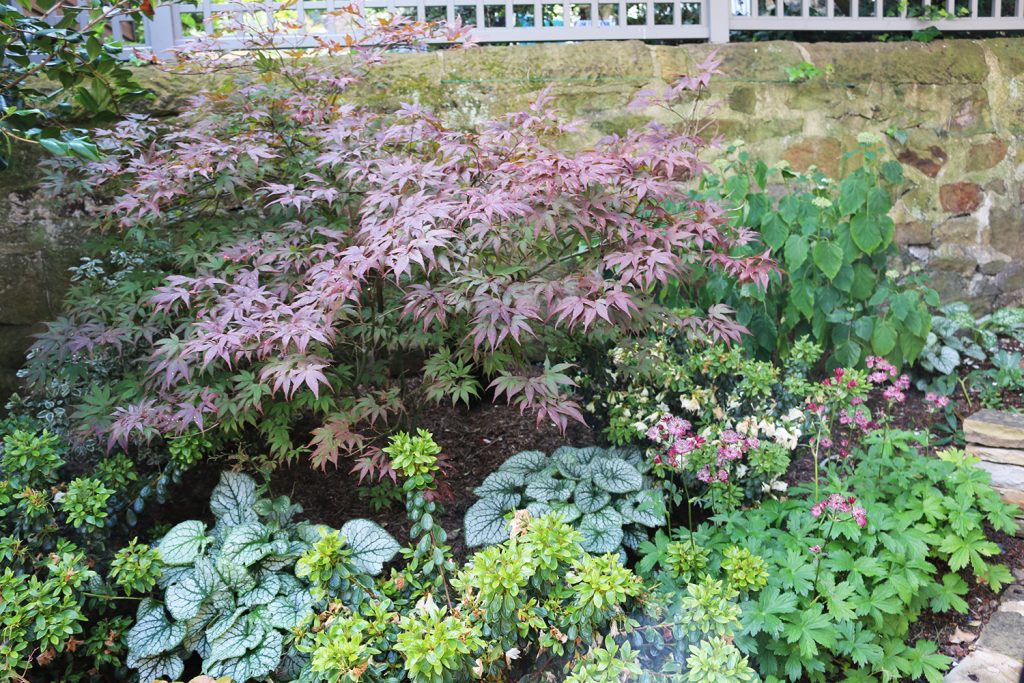 As the morning was drawing to an end, so was our time in Ilkley. The sixth garden we visited was also a personal favourite of ours due to the stunning design and use of space, paired with the plant varieties used throughout. Over lunch, we admired the views this large, formal, back garden that had its own tea house and grotto, as well as featuring a box parterre, a rose border and a woodland front garden with ornamental borders. 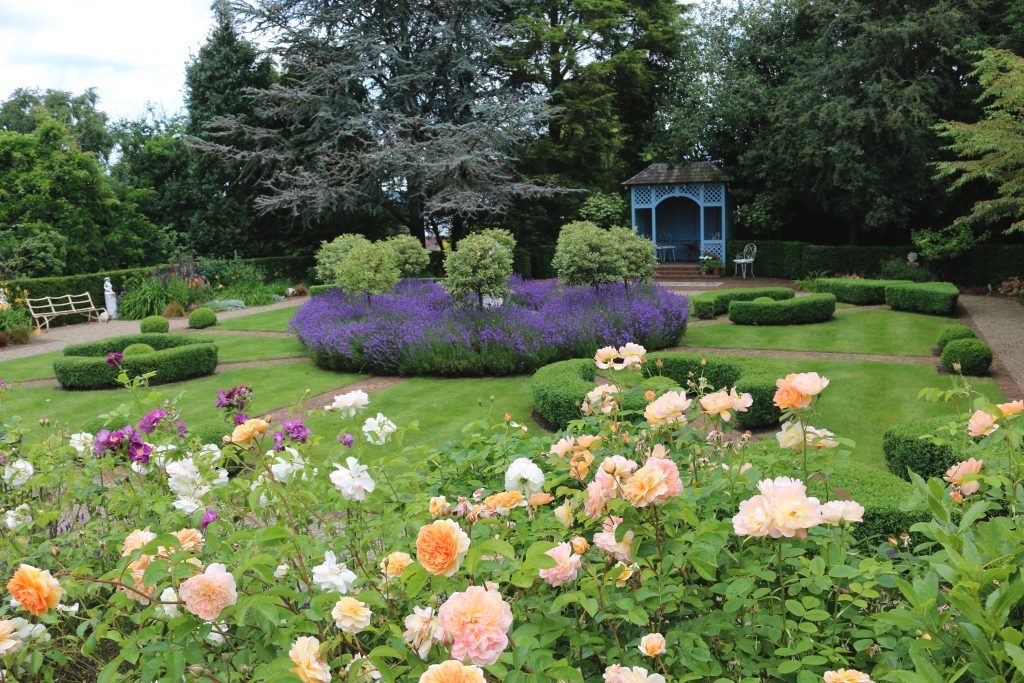 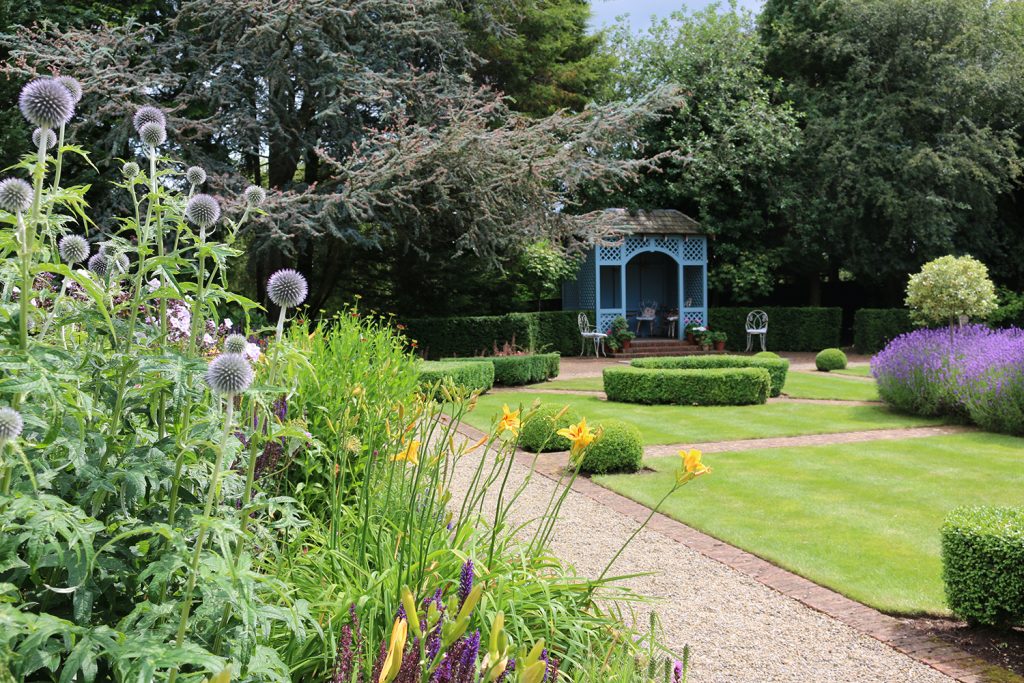 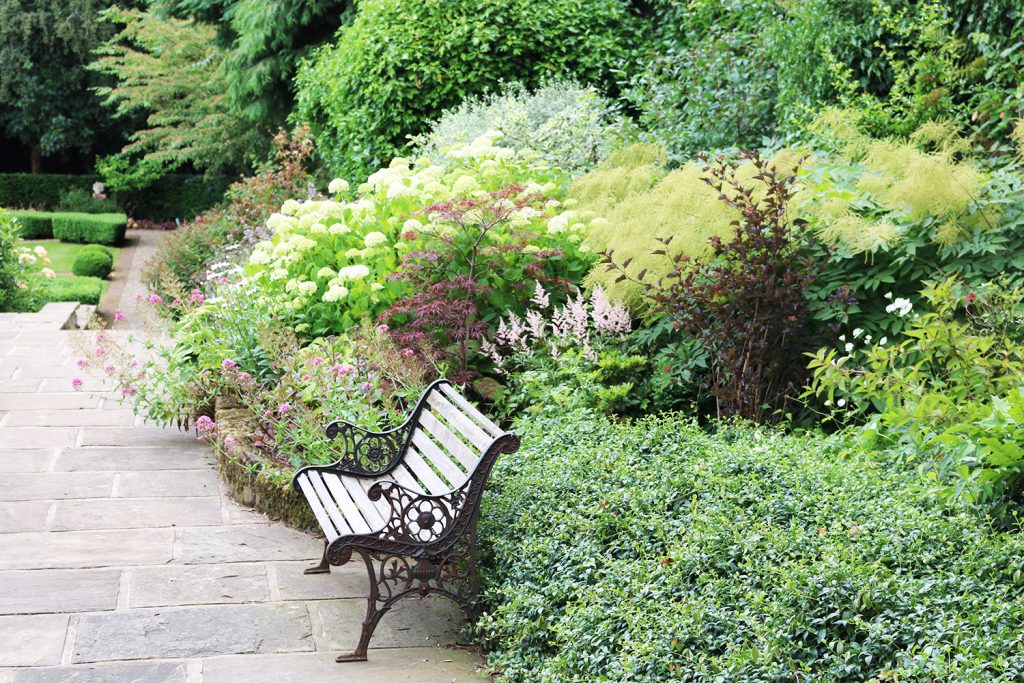 At the next two gardens, we saw a contrasting pair of new cottage style townhouses in Addingham. These smaller gardens had roughly the same square footage, but it was great to see how Helen Taylor Garden Design had taken two very different approaches.

The first had a symmetrical vegetable parterre with gravel paths and repeat planting that included varieties such as lavender, salvia and Buxus. At the end of the garden were large pleached hornbeams to provide screening and privacy from the houses behind. 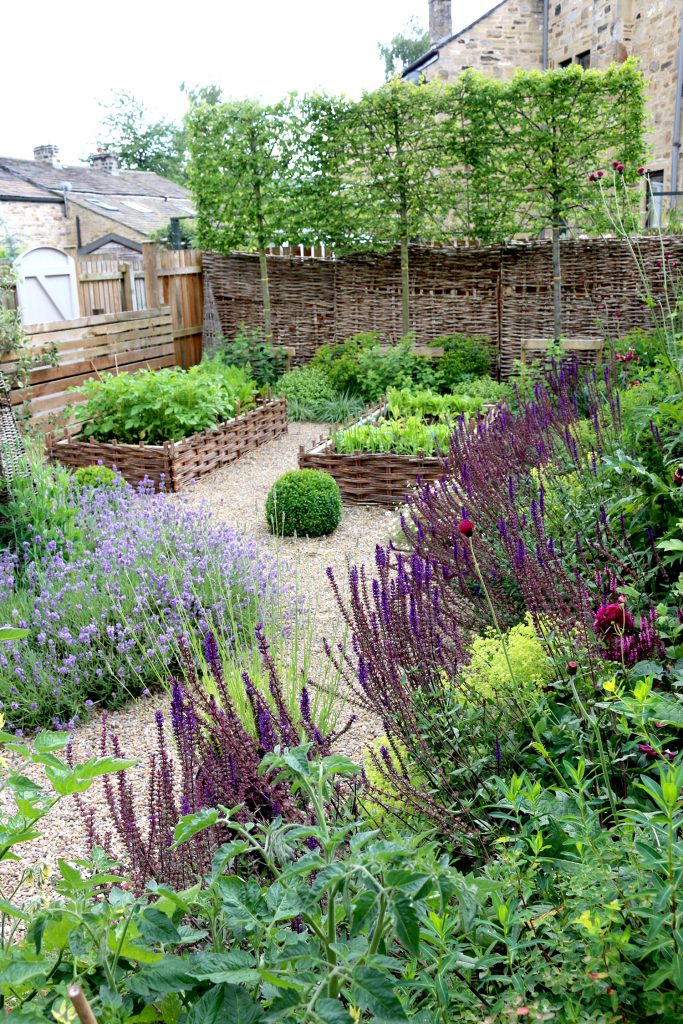 The second garden included a small lawn space, unlike the previous, and featured tidy borders, a rosemary hedge and a fantastic trellis screen and rose arch. Some of the plant varieties used included nepeta, climbing roses and lupins, with the bottom section of the garden through the arch leading to a shady summer house retreat.

The final garden visit of the day was also in Addingham. This time we visited a well-established, back cottage garden. Enclosed by an old stone barn, it included a summer house, wildlife pond and a vegetable and fruit garden, along with Delphiniums, Astrantia, heucheras and penstemon plants. 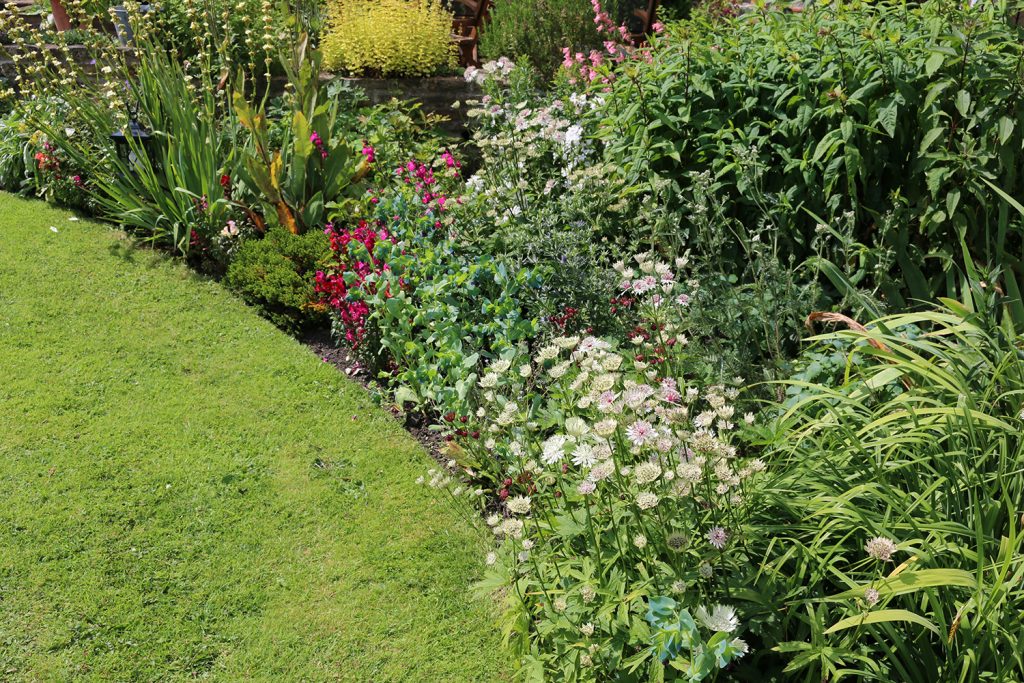 We had a truly lovely time being able to see first-hand the work done by Helen Taylor Garden Design, not only as finished gardens but seeing how the plants picked from our nursery have been used.