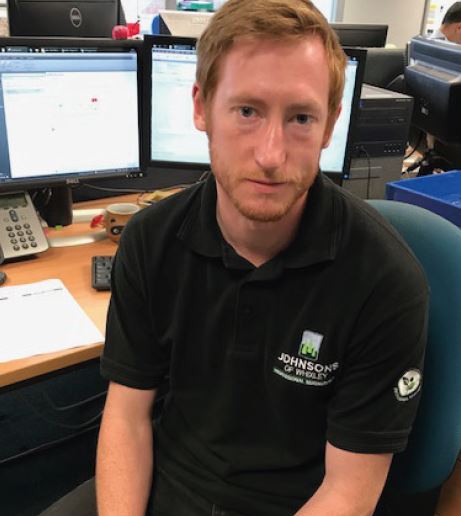 Congratulations to Terry Cooper who has taken on the system support assistant role and will be working alongside IT Manager Darren Earle.

Where did you work prior to Johnsons?
I’ve done quite a bit, worked as an engraver with my uncle for a few months, which seemed interesting but I only really scratched the surface whilst there. I also worked at a guitar shop in York but had to quit as there were just too many strings attached. I have also been a call centre android, supermarket vegetable wrangler, construction site high visibility statue and a chef.

What was your previous role at Johnsons?
I have been working in operations, generally ensuring all orders are processed and allocated correctly,before that I was outside on the nursery, mainly with the plant production team at Cattal.

What will your new role include at Johnsons?
It’s quite a varied role, but mainly I will be involved with providing direct user support, some development and System testing, Cyber security,
General monitoring, Maintaining and updating of the Company’s IT Hardware and Software, I will also have to buffer the calibrated pixel-layer memory matrix to ensure that the quantum-core kernel correctly defrags the encrypted data mainframe and vector-cache.…and of course the classic turning it off and on again.

Have you always had an interest in IT ?
Yeah definitely, us early ‘millennials’ were kids during the time the internet became widely accessible and it was hard not to be influenced by such a fascinating communications revolution.
I also remember getting in trouble at school for repeatedly changing the homepage from askjeeves to google, despite it being the superior search engine.

What are you looking forward to in your new role?
The opportunity to acquire knowledge of a constantly evolving progressive industry sector and seeing tangible benefits where I.T improvements have been implemented.

What do you think the Challenges will be?
Without a doubt remembering what all the acronyms/initialisms stand for, MAC, HTTP, DBMS, DHCP, DNS, TCP/IP, SMTP…. The list is endless!

Is there any specific courses you will be attending to help with your new role?
I have enrolled with the exclusive Darren Earle School of Information Technology which is fantastic, i will also be ‘attending’ various webinars on database administration and SQL, working towards a Microsoft accreditation.

IT Manager Darren Earle said "Seeing Terry’s involvement in a few projects he has worked on in his old role I recognised that he had a flair for IT. Coming from a User role into a Systems role will provide a great benefit to developing new projects. I’m looking forwards to working together"