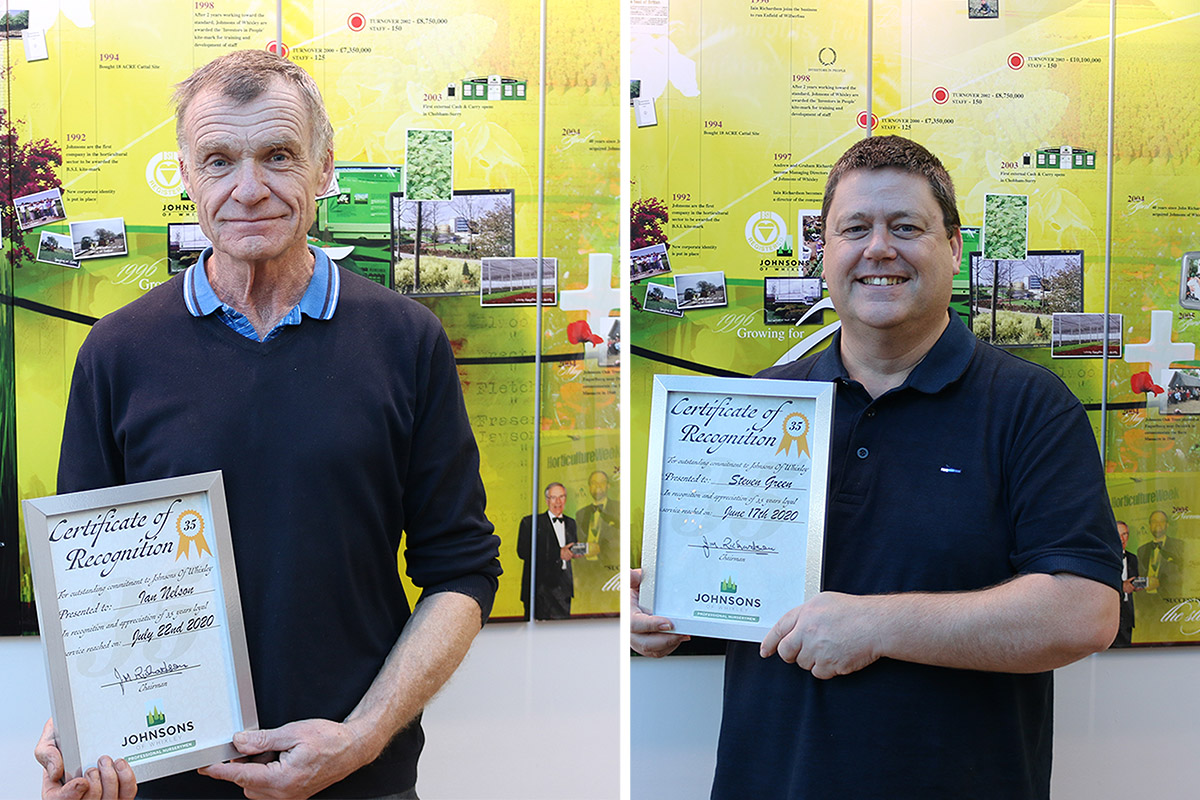 The company will highlight their long service with vouchers and certificates.

Find out what they had to say about their time at Johnsons below: 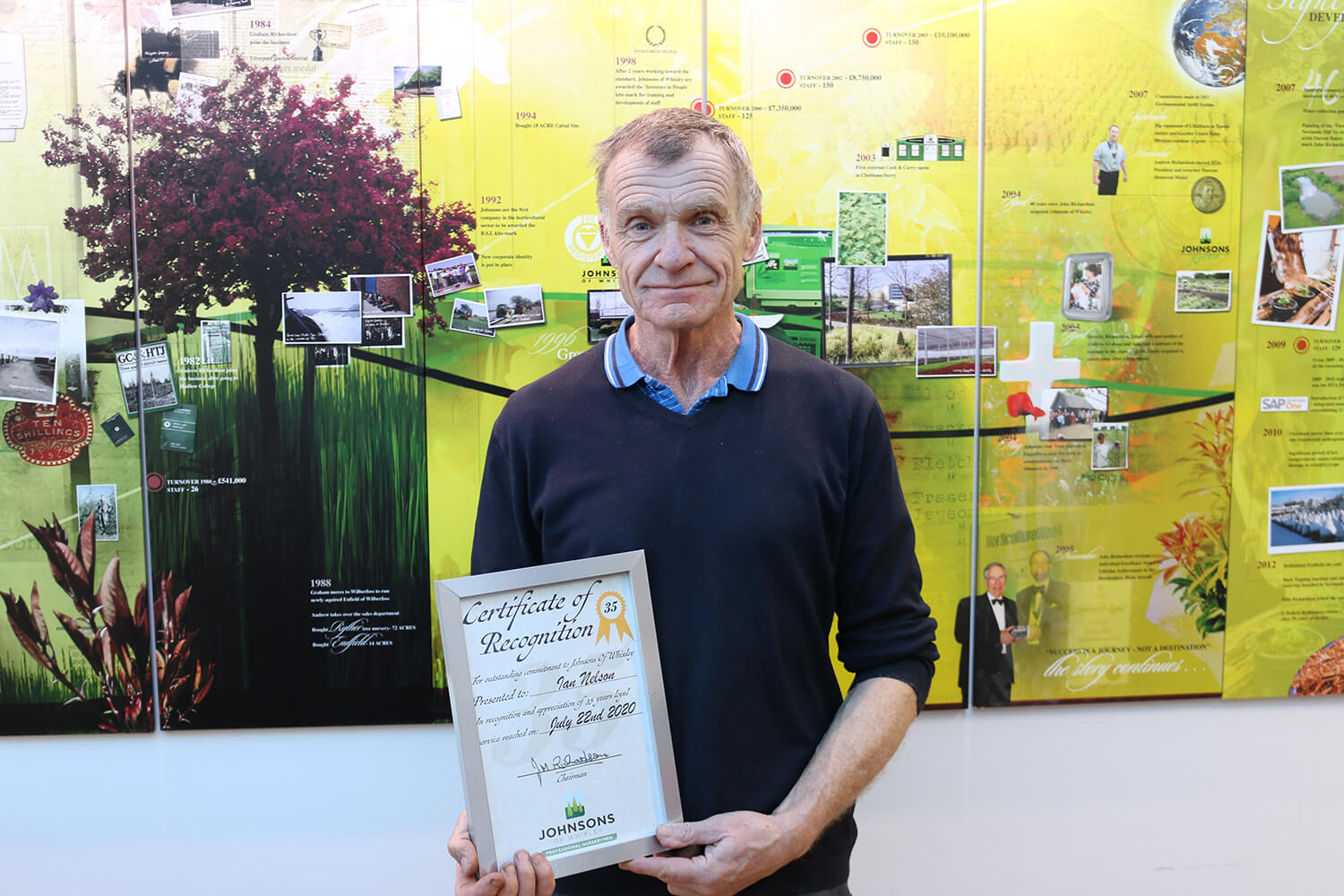 1.What have you enjoyed most about your 35 years at JOW? – I’ve been fortunate to have the chance to grow my career alongside the growth of the company itself. I genuinely love plants but ultimately it is about the people you work with and there’s always been a good team here. Retaining that spirit is precious.

2. Tell us about your career at JOW, what was your first role etc? – I remember Day 1 as a ‘middle-year’ student. Jim Bryan & myself weed-spraying – with trainers on I think….don’t tell Terry & Dave. I guess I found a niche once the then Prod Mgr, Danny E, asked me to put my brains into weed-control programmes & pest & disease control. I wanted to have the Production Manager role and was lucky enough to do that for 18 years. It has been nice to pass the role onto Rob Richardson and feel assured it’s in good hands.

3.What has motivated you to come to work each day? – Keeping people in a job, seeing staff develop their own roles.

4. What has your greatest accomplishment at Johnsons been? – That’s really for others to judge!!   Perversely my best (and most personally rewarding) work is probably when we’ve been struggling, having more challenging years. Perhaps those difficult times brought the team closer together and played to my strengths of ‘winging it’.

5. Most memorable day at JOW?  – it seems funny now but at the time it wasn’t. We are going back 30+ yrs, the nursery was very different, I was driving the planting machine & right in front of the Boss (I’ve always called JMR the boss) I managed to squash the end of a 10m long aluminium irrigation pie which was hiding in the weeds. He gave me such a roasting              Those irrigation pipes were near god-like & I recall Pete Jacques burying one he’d squashed to avoid John’s wrath!!!

Another memorable day has to be the time I was in charge of taking some staff abroad, I checked to make sure they all had their passports in the car and at the check-in desk realised I'd picked up my girlfriends passport and had to get the next flight out.

6. If you could have chosen any other career, what and where would it have been? – a misspent youth where study and work were not part of the plan didn’t help a career. Looking back I would like to have been an architect (buildings not landscapes), have something that would be there for years & my kids could say ‘My Dad did that’ – but the only architect I know personally specialises in toilet and shower cubicles. Wouldn’t aspire to that. 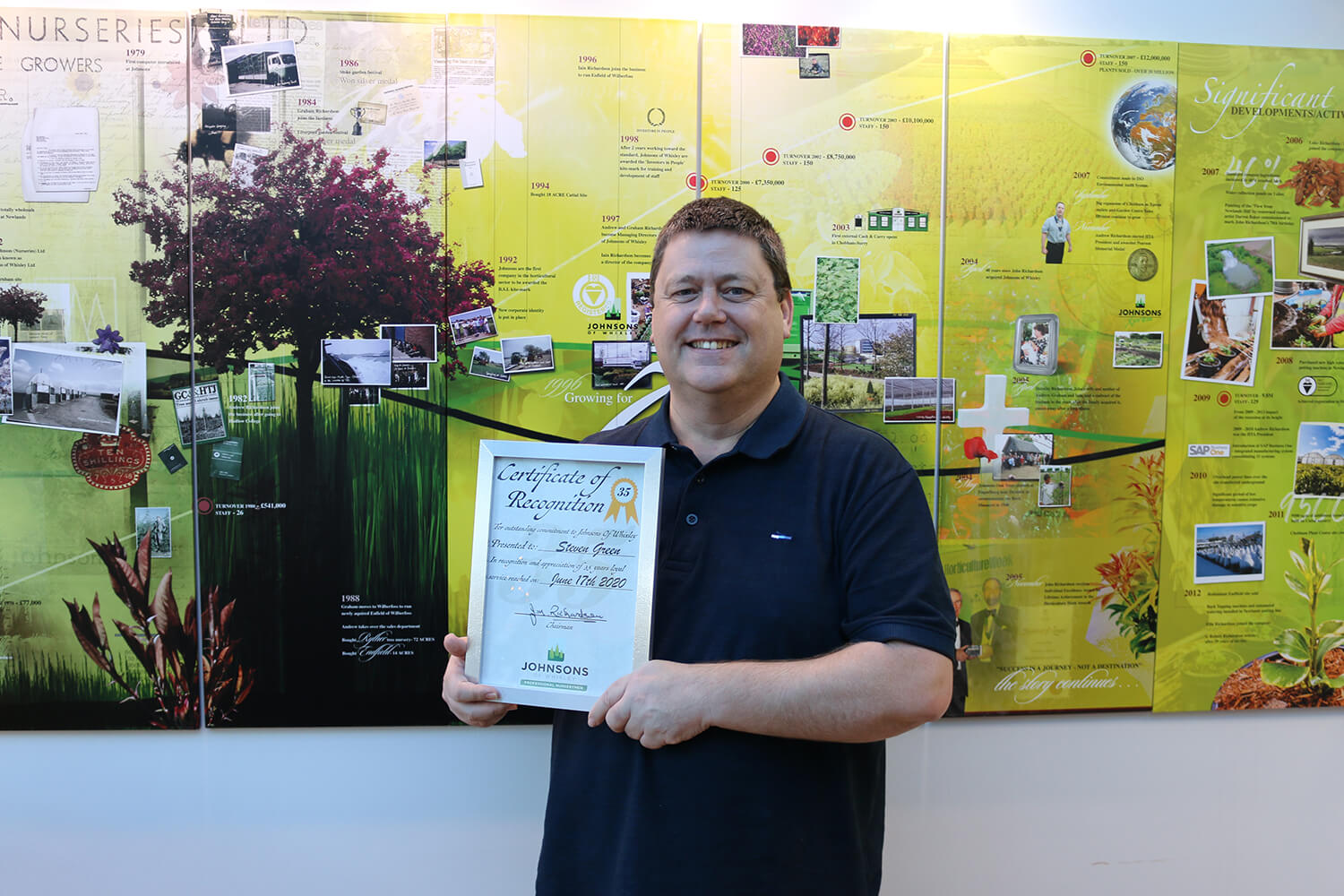 1.How did you come about working for Johnsons?  I followed my Fathers footsteps, he worked for Mr Johnson in the 60s, and latterly Mr Richardson.

We also had just short of an acre of land at home which my Father grew Roses and cut flowers for resale as well as fruit and veg, I spent what seemed like hours de-budding chrysanthemums and digging the garden, Though I expect it was much less. I worked school holidays at Johnsons nursery through the summer so knew a little of what I was letting myself in for.

2.Did you work anywhere else prior to Johnsons?

I worked on Alistar Taylor's (Thorpe Trees founder) farm picking potatoes during half term, it paid really well. I also worked most weekends from 15-16 years old with a friend, we a had a window cleaning round in Whixley village which was a good cash earner but was hard work as we had to carry ladders, step ladders and buckets to every job.

3.First position within the company?

I started the day after I left school at johnsons and was sent trimming trees with Chris Umpleby. This did not last long as I had to wear wrist support due to breaking my wrist playing football a number of weeks earlier.  I was then sent to Whixley to work for a couple of weeks hand potting with Paul Lamb. I then spent my first years tying trees for John Walker and Dave Bramley both were excellent trainers of all aspects of life at Johnsons and horticulture.

4.If you could have chosen another career, what would it have been?

Other than a sports superstar I did try and get a Job with T Backhouse and Son at Hunsingore prior to leaving School as one of the few lessons I attended was woodwork, Backhouses were the local undertakers and supplied fencing posts, sheds benches as they still do now.

5.What has made you stay at Johnsons for all these years?

The variation, the chance to learn, the chance to travel, the people I have worked with over the years and the relationship I have with the Richardson’s who I grew up with in Whixley.

Trips abroad with groups of colleagues, On one particular trip I remember Adrian Shippey looking after me on the roadside after a particularly rough crossing on the ferry.

The company's chairman, John Richardson, said: "It is with pleasure and sincere thanks that we enjoy the real contribution made by such long-serving staff. We look forward to them being with us for many more years to come."